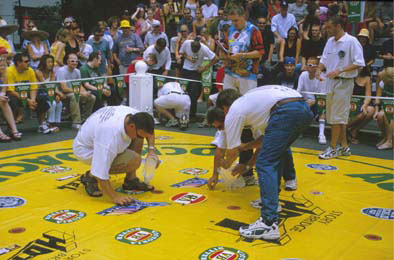 It’s not really much of a world-wide event, but the people of Brisbane love it

Today I speak on what has to be one of the stranger traditions in Australia.  It’s the activity of cockroach racing and every year Brisbane hosts the World Championships of this insect-themed event.  On January 26th of each year, people gather at the Tory Bridge Hotel and in the surrounding areas to pit their roaches against each other, place bets and generally get very drunk while doing it.

As legend has it, the tradition started because of two drunk people at a pub arguing over which area of town had the fastest roaches.  They decided that a physical demonstration was in order to prove their point.  The people who happened to be at the pub enjoyed it so much (alcohol probably had some part in this) that they begun doing it on a regular basis.  The World Championships have now become so popular that there are live bands, sponsorship to fund the event and even television coverage.

The day begins with festivities and things other than races, though everything that goes on is roach-themed.  There is music, people dressed in costume, carnival-like activities, and plenty of food and drink.  Once midday arrives, the preliminary races begin.  This first set of races is just to warm people up and the big events, with the “prize” racers, come later in the evening.

To determine the winner, the roaches are thrown into the middle of a circular mat and released all at once.  The first three to go scurrying off the edge are declared the winners.  Considering the speed and erratic movement of roaches, even figuring this out can sometimes be a complicated issue, especially if drink is involved.

But the World Championship Cockroach Race is more than just an excuse to hang out and get plastered.  All the proceeds from the races go to charity.  If you happen to be in Brisbane during the Australian summer, check out this oddball event.  Even if you’re not a fan of roaches, it’s still a damn good excuse to have a few beers with the locals and experience some of what Australia’s stranger side has to offer.