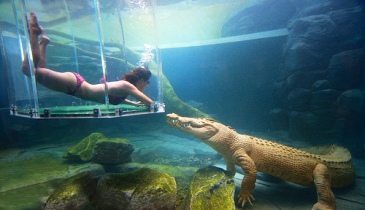 A chance for the brave of heart to get up close and personal with some crocs.

If you happen to be into crocodiles or just reptiles in general, there’s a place in Australia that is devoted to bringing visitors the best of what the country has to offer.  It’s called Crocosaurus Cove and it’s located in the heart of Darwin City.  It boasts some of the largest saltwater crocodiles in the entire country as well as the world’s largest display of regional reptiles.

While at the Cove, visitors have the chance to participate in many interesting reptile-related activities.  You can hold a real live baby crocodile, watch the staff as they feed the many exotic creatures and even swim in an aquarium right next to a population of crocodiles.

There’s a turtle sanctuary and aquariums filled with many unusual Australian fish.  If you’re feeling like feeding the crocs yourself, you can use a fishing line baited with a hunk of meat to try to pull them out of the water.  All this is accompanied by many exhibitions of Aboriginal art, highlighting the presence of the native people in the Darwin region.

But what Crocosaurus Cove is best known for is the infamous Cage of Death.  You can, if you happen to be brave enough, sit in a submerged glass box.  In the surrounding water are some of the largest saltwater crocs in captivity.  While they’re generally mellow, even with a meal so close by, sometimes they get agitated and will try to strike the swimmers through the glass.

The Cove focuses on letting visitors interact with the animals on display, so it can be a great place to both see and learn about all these unique Australian creatures.  It’s not too expensive to get in, which makes it a good destination for families on vacation, although the Cage of Death will cost you a pretty penny.  $120 worth of pennies, in fact, but you can get a deal of $160 for two if you bring a friend along.